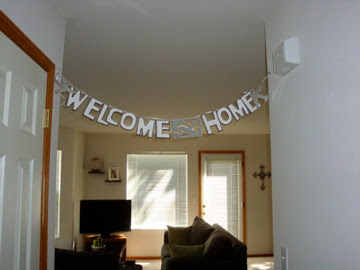 Yesterday around 2:15pm, Kenny's plane arrived in Washington! The coolest part was that we got to watch Kenny and his crew land the plane, taxi, and unload. During this process, the three of us who were there waiting took pictures since we were th three pilot wives. Well, this got us in a wee bit of trouble to say the least. We had two military police come up to us just as they were going to let us through the turnstile onto the flight line. After being told to delete our pictures, having to go get our IDs, tell them our addresses, and our husbands middle names, then we got to go through the turnstiles to see our husbands. YEAH!!!

So despite being sick with a cold, Kenny is home! 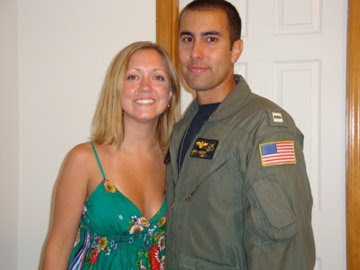 May the other husbands get home soon too!
Posted by Molly at 9:50 AM

Oooooh...you are so bad! You and Carter can now swap "I had a run in with the base police" stories!! :) Welcome Home Kenny!

so very nice to see both of you together, and thank goodness you didn't get flustered and forget his middle name. enjoy....much love to both of you, Carolyn