So here I thought Kenny would be the one to post, but this weekend I got pretty caught up on life, and poor Kenny was the one working until almost 8pm on Friday night.

We flew into Honolulu on the 25th and the weather was cloudy, but WARM! We spent the first afternoon just hanging out with the other 3 couples and recovering from an eventful 6 hour flight. The girl in front of us had a medical emergency while we were in the air. It was rather exciting and not in a good way. She ended up fine, but epi pens were pulled out and oxygen was turned on. That evening we went to dinner at a restaurant in Honolulu where you got to grill your own food. My Mahi Mahi was so mouthwatering I wasn't willing to share (woops).

The next day was Thanksgiving. We spent the morning on the beach before getting to have a Thanksgiving feast! We had a turkey that was cooked Hawaiian style in the sand! It was so tender and moist. There was delicious stuffing with sausage in it, and broccoli casserole, and the Vaughn Potato Casserole, and my pecan pie :)

The view off the back of the house on Thanksgiving Day! 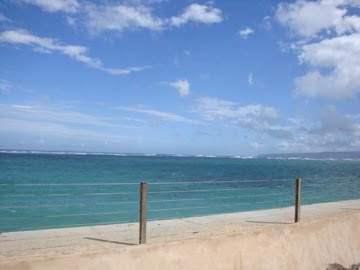 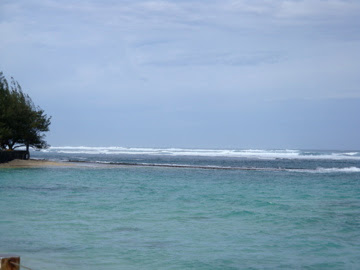 I look a little pale, but oh so warm! 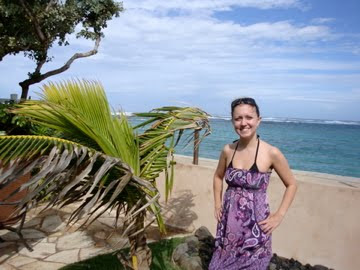 The next day was a surf lesson for everyone while I lounged and soaked up the sun while reading for fun. My idea of heaven. :) After another day on the beach, it was time to head back to the house and rest up for Saturday's adventures.

Off to conquer the waves of Waikiki... 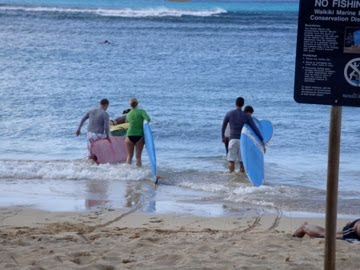 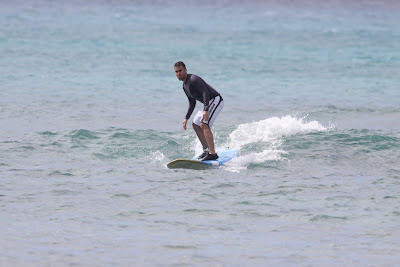 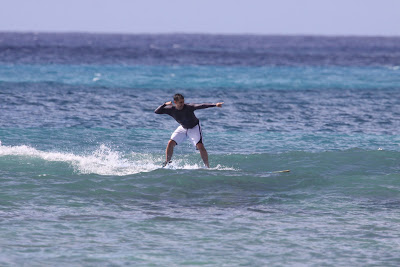 Everyone else was heading to the Hawaii/Naval Academy game, so Kenny and I headed to Pearl Harbor, hiked the Manoa Falls, hiked Diamond Head, drove up the Northern coast, and ate Mexican on the North Shore. My souvenir was a Pearl Harbor DVD for my class. I was so excited to be there at such a historical landmark. It made me want WWII to come faster in US History. To heck with Jackson and the National Bank :) Kenny's souvenir was a cool book on the plane that Papaw flew! All in all, it was an awesome day! 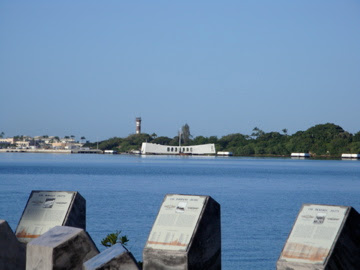 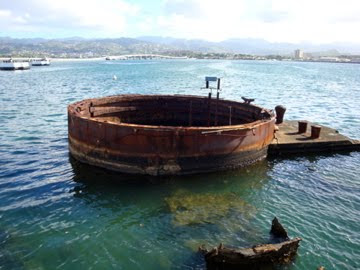 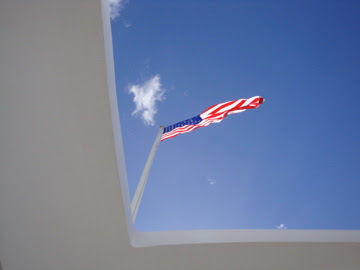 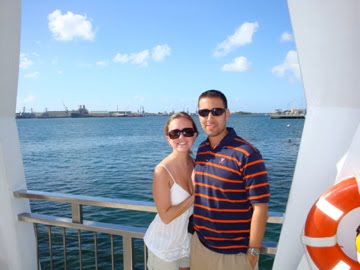 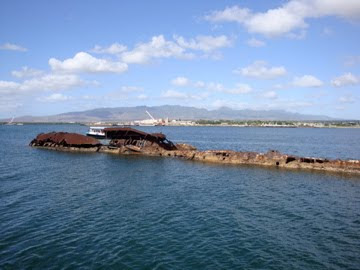 Hiking up the Manoa Falls (where LOST is definitely filmed!) Hikers have come down this trail and seen the crew filming! 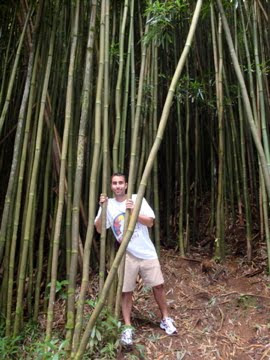 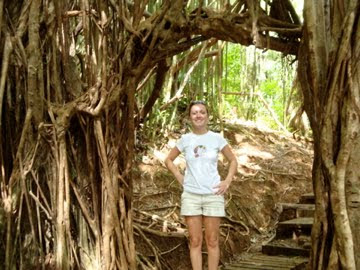 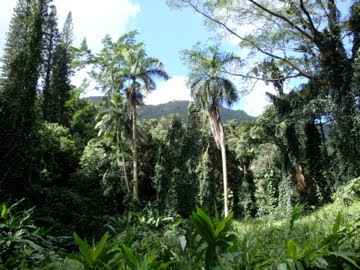 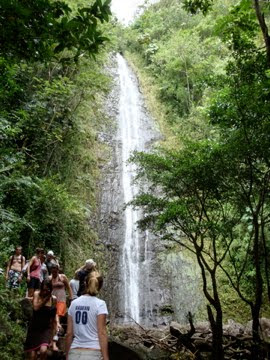 Diamond Head Crater. Kenny is the only one near the edge because I may have a WEE fear of heights. Let's just say, had Kenny not been there to encourage me, and had I not said the Lord's Prayer over and over, I might not have made it! 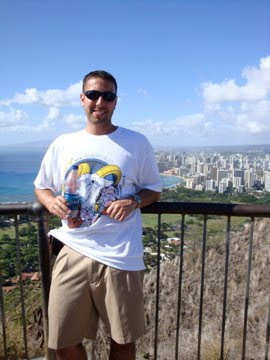 Yeah, we hiked up that. 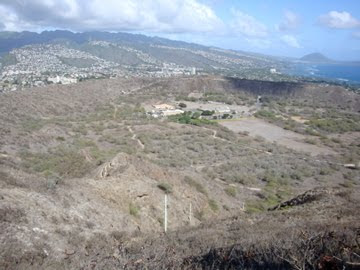 Just the coast of Oahu. Kind of beautiful! 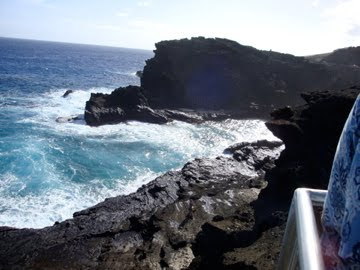 Sadly Sunday we had to pack up and head back to the wind and cold. Before everyone else got up, Kenny and I drove down the coast from our house to take some pictures of the beautiful scenery. Where we were staying was just down the road from where parts of LOST is filmed. We are HUGE LOST fans, so we were pretty pumped! We even stayed down the road from "The Others" homes which were first The Dharma Initiative's homes. If you don't watch the show, don't worry about it. We were jazzed, but then it was time to take out the trash and head to the airport. 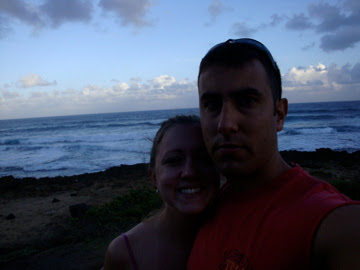 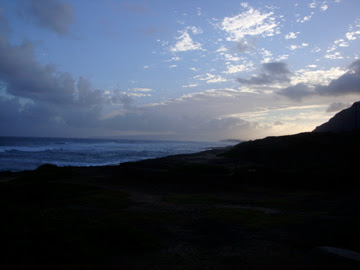 The Other's Houses! (Or the YMCA camp) 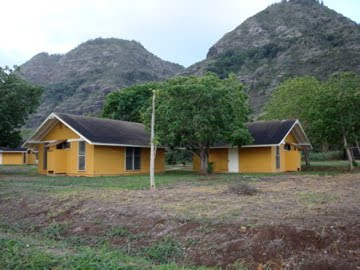 We were so glad to get to be warm and get to see Hawaii before we move from the west coast! We certainly will have to go back!

Hope you all had a great Thanksgiving!
Posted by Molly at 5:39 PM

That is so fun. We saw Lost being filmed one day, super cool! And I saw the radio tower from the season finale 2 years ago, and the fuselage, which was kept where I sky-dived (north shore, small airport). It's most def our fave show too, so that was so cool!

so happy to see the pictures from your Hawaiian Thanksgiving adventure. Kenny, glad to see that the surfing was better than when we were there way back when, if I recall the waves and board didn't cooperate then! Most of all so glad you visited a place that we loved so much.