Boozer and his posse...

So Kenny and I have been working with a fourth grade student at our church because he has had some issues with some of the other kids. Our goal this first part of the year was to get him to make the props/background for the Christmas play that the kids put on. The kid is a great artist, so it was awesome to watch him whip out three large animals in no time. Kenny said that he would cut out the animals and give them "legs," so that the animals could properly stand at the birth of Christ. Now after Kenny finished these animals, they hung out in our living room for a while since there was no room at the inn... just kidding! We wanted to make sure we didn't forget that we had them and needed to get them to church. Well since the snow has made it rather difficult to get to church lately (forgive us God), our animal friends have been "chillin" in our living room for a while. They have been here so long that Kenny gave them names. Boozer (the donkey) is the head of the pack, and his posse consist of a lamb and a llama. I like to think of the llama as Boozer's protector. You know, that best friend that is the brawns but not the brains? That is the llama. Then we have the sheep that is a follower, so typical of a sheep... So Boozer and his posse have been hanging out for over a week. 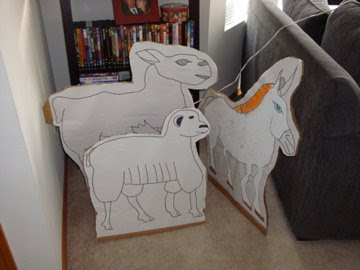 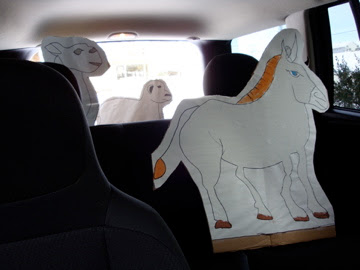 Sadly, my crew got out at Anacortes, but Sara and I treated ourselves to Gere-A-Deli in Anacortes. YUM! That made the break from friends a little less painful. Please notice the enormous brownie that we shared.... Chocolate makes EVERYTHING better! And I am not in the picture one, because I am taking it and two, I think I devoured my sandwich in 30 seconds. 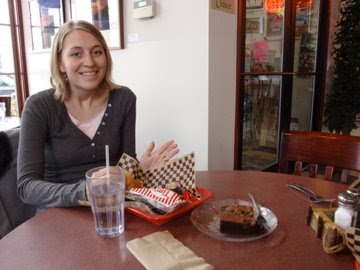 Since they have moved the Christmas play to the 28th due to the impending snow storm that is happening right now, Kenny and I won't get to see Boozer and his posse in all their glory and their acting debut. However, we will be missing them and rooting for them from the east coast.
ps. i am thinking seriously of asking for them back when Kenny deploys in January, so I always have a crew to "chill" with. is that strange?
Posted by Molly at 6:20 PM

these guy's look like something straight out of beavis and butthead! :) y'all are awesome...i love how involved y'all have gotten with the youth at your church...you guy's rock! :)